So we now have an empty house… time to fill it up.

Items in the house fit into 1 of 3 categories:

There were a number of blingy items I added to the house, most of which were pilfered from my youngest son’s toy collection!  My favourites are listed below:

The Playmobile people (and dog)

The house was interactive, and a later chapter describes the 2 controllers I built to operate the house.  In general kids really enjoyed turning the fan on and off, changing the music and controlling the other electronics.  But all the younger kids wanted to do was play with the Playmobile dog and people! 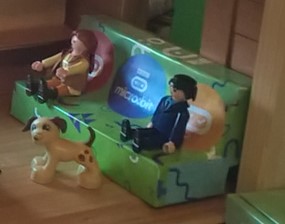 The dog usually sat in front of the fireplace and the people sat on the couch – it added a nice touch.  I also used a Playmobile pack of cards, so it looked like they were having a game together.

Can’t have a book shelf without books, and I had a book shelf… ergo I needed some tiny books. 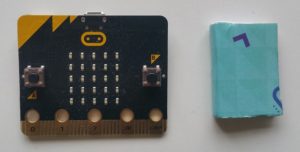 I made this with some hard paper (not quite cardboard), which I cut to size.  I added a micro:bit sticker for appearance and strength and cut and glued some paper in for the pages.

My painting is a masterpiece – literally!  Its a tiny print of one of Van Gogh’s poppy pics.  The frame is made with slivers of wood from a louvre and the base is 2 pieces of louvre. 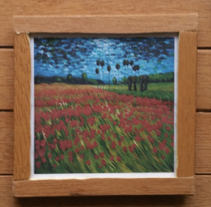 My memory of events is that the first creatures that were teleported between 2 micro:bits were giraffes.  It was @MrTomsWorld who built it back in 2016 (he wrote a great blog with more details).  Simple but charming, this inspired a lot of us at the BBC on the original project, and it was that app that got me interested in using the radio to code.  It is very interesting to me that the article specifically mentions teleporting a duck rather than a giraffe – not sure why I’ve believed it to be a giraffe for all the years, but I did!

In a homage to this inspirational application I always included a giraffe in the house.

Next: The micro:bit house (6) – furniture