After several months of hand-coding the game world to test Springman2 in, it became apparent to me that a tool to create levels was the only way that Springman had any chance of moving forward.

I set out to build a GUI based system where it was easy to place all manner of items into a world – anything supported by the game had to be available in the GUI.

Of course creating levels means saving them, and then reading those levels from a save file and reconstructing them.  It was an epic undertaking that took several months to ‘complete’.

“Completed” meant it was at a point where it could design and save levels which I could then use in Springman2.  I learned 2 things: 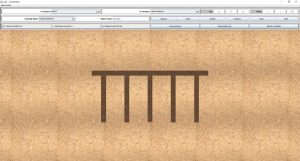 Above: a simple design in the level builder UI seen front on. 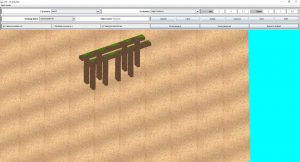 Above: the same object viewed from a different angle in the UI

In the end this tool became crucial to my testing – it was very easy to drop new elements into this environment and test them rigorously.  Collision detection in particular was helped greatly by this tool – the avatar (kind of like a cursor) that you use in the 3d frame collides with objects you place in the world, so testing and fine tuning collisions is easy.

It also provides the perfect canvas for me to draw objects from Springman3 as I develop the updated system.