This started with me being a bit bored.  I fancied a new Java project, but I wanted to broaden my horizons a bit and try something new.  So I asked Quora for suggestions of what technology to play with.

Someone suggested OpenGL, which I thought was obsolete.  I had a peek anyway and, then a dabble, then a peck.  Next thing I’d started on my magnum opus: Springman; a piece of work that is unlikely to ever be complete.

Springman1 is a side-scrolling platform game where you navigate a world of perils in the form of an articulated spring.  I never set out to design a game – it just kind of evolved from the OpenGL equivalent of Hello World (which is basically just a primitive 3d shape drawn on a canvas).

Springman1 has 2 levels, the first of which is set on a path through some woods: 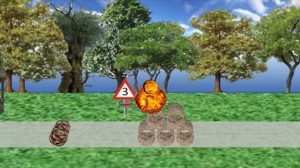 In the image above Springman has just expired after crashing into the inconveniently located log-pile.

Level 2 is set amongst the clouds: 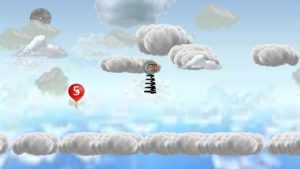 The problem with Springman1 was that it had evolved organically and the code had no real structure – it was very dirty, hacky code and was beyond redemption.  I am not being precious – one of the issues I had was that the world was made up of 2D images, so the camera could only move in 1 plane.  I wanted to explore 3D (otherwise why not just use Java2D anyway?).

The POC had served its purpose though – I was now beyond beginner level at OGL and had an idea of how the OOD for a game should look.  So Springman1 was retired, but only after my lads had great fun playing it!

Its much smoother when you play it!