Have you ever lamented the limited range of user-triggerable events that can be used as an input mechanism for the micro:bit?  There is only so much you can do with 2 buttons and an accelerometer!

The Philtronic2000 (PT2) was originally conceived as a controller for the micro:bit house.  I built it to give me a much broader range of input options than the micro:bit has natively.

If I am completely frank I also did it cos I imagined a wooden controller that looked a bit steam-punk – the sort of thing that would not look out of place in the lair of a 60s James Bond villain!  It didn’t come out like that, but I was not unhappy with the (unfinished) product: 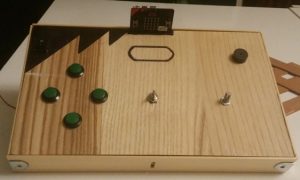 It has 4 momentary buttons, a toggle button, an on/off switch (top left) a potentiometer and a piezo buzzer. 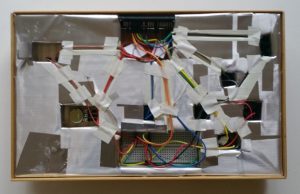 The idea is that the events triggered by the user are communicated to the micro:bit, which then transmits information about them over radio to a listening device.  I’ve used the PT2 on my model house and my matrix, and I am sure it will get used in any other projects I might take on.

The top is a piece of veneer wood – it was the back part of a cupboard.  Thin, easy to work, light and good looking (I love wood!) – I am seriously at risk these days of choosing new furniture based on its upcycling potential!

The sides are the wooden louvres from a blind – my go-to construction material!  They are held together by cheap braces bought from the local DIY shop.

The bottom is a mesh made from louvres – it holds the insides in whilst having enough gaps to allow someone to see the insides, if they were inclined to do so. 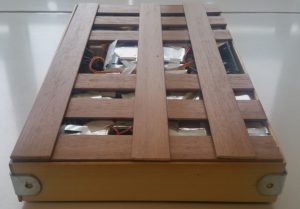 Inside it’s polystyrene all the way, chiselled and shaped to channel the cables neatly to where they need to go.  The channels in the polystyrene are covered with stickers – last thing I wanted was a short causing poisonous polystyrene fumes to ruin whatever event I was using it at!