I was very fortunate in my time at the micro:bit Foundation to be given tons of free kit, often before it hit the market!  I always tried to use it in some interesting or creative way.

One of my favourites was the 4tronix bit:bot: 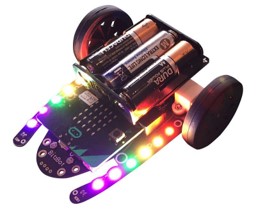 I built a track in my study and myself and my boys had loads of fun programming paths into the onboard micro:bit to navigate around it.  With each iteration we would add a couple more steps to the path, test, tweak etc.  It was like Logo, except the on-screen turtle was a physical device.

Create a track easily by finding long strips of cardboard.  I used the covers from loads of old note books.  Cut long, low strips and they should be easy to secure to the floor with Bluetack, or make small runners out of Polymorph.

The idea of the bit:bot being driven along a path, remembering it, then repeating the path was inspired by this experience.  I designed an app that would remember the commands it was given, rationalise them (so for example it would combine multiple consecutive changes of direction into a single change) and save them.

Now I could drive the car around a track, record the path, put the car back at the beginning, set if off retracing the path, et voila!

Check out the finished product in the link below:

Fun little #microbit app with my bit:bot – as u drive the path is recorded. It can then retrace the path. I made a vid! pic.twitter.com/a2QlZ3MVBw

All the code is on GitHub, and it should be fairly straightforward to adapt it for other vehicles.  I also uploaded the project to Hackster. 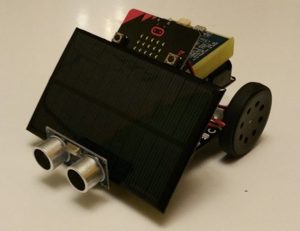 I got quite far with it, but got discouraged because I could not get the sonar distance sensor to work with 3.3V, and stopped working on it when I started the micro:bit house project.