Back in 2015 the BBC found themselves with a surfeit of micro:bits.  The “1000 micro:bit matrix” was conceived and, with Kitronik taking a lead role, was ultimately built.

This video from @AmazingICT shows it off very nicely (thanks Richard!):

I am quite chuffed to have helped build it – with guidance from @MrsClaessens I helped put together one of the panels.  But I was working blind – I didn’t understand how it was put together or how it operated.  It looked very complicated – RPis all over the place and enough cable to stretch from Manchester to London (I am making that bit up, but there was a lot).

Its the sort of thing one looks at, admires, but only the best of makers are inspired by it – its too complex for regular people, like me.

Or so I thought…

… until @WhaleyGeek released his WhaleySans numerical font for the micro:bit.  WG had needed to display 2 integers on a micro:bit screen for a clock he was building, so designed the font to support that. 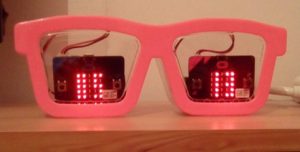 I added support for alpha chars and scrolling, just for fun, but in doing so I spotted how his code could be used to create images and animations on the fly.

Could these images be communicated over radio between micro:bits, and if so could multiple micro:bits receive images simultaneously from another micro:bit?

And so the micro:bit matrix project was conceived.