Who remembers Planet Source Code (“Dream it.  Code it“)?

Back in the old days (pre Y2K),  before there was Stack Exchange or Slack and when Google was still a baby it was THE goto place to showcase and borrow code (well, it was for me anyway).

I had quite a few apps on there, including the earliest online article on how to use error trapping in Java to emulate the Goto function:

Aside: at this point I need to defend myself! I know Goto is anathema to good OOD and a little piece of me cringes every time I have to use it in VBA! I didn’t do this cos I advocate using Goto, I did it cos my tutor, who I didn’t really like (NOT you Shaun – the other one with the funny name!) told me categorically that Java did not do Goto. When all is said and done, Java error trapping is just Goto without the keyword.

Anyway, I lost a lot of code when PSC crashed in 2015, including a polished version of Connect4, a cool little game that I never managed to come up with a name for and some very useful VBscripts (one would perform a mail merge from 2 csv files into emails and was quite heavily used).   They exist on a local disk somewhere, but I’ve never been able to find them.  Sad!

The only piece of my PSC-era code that survived was a little app I created to generate charts automatically from a table of data, which I called Chartgen (rem – those were the days where we were ‘trained’ to have a 8 char file names!): 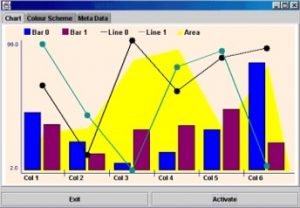 You just had to point it at a table and it made a half decent chart.  It supported multiple graphing styles and (as you can see in the pic) allowed you to mix them up on a single chart.  There were extensive formatting options too, and the sizing was dynamic and quite effective (notwithstanding the inevitable edge-cases).

There was a GUI (shown above – not too bad for Swing really!) but the idea was that it would be used by websites to generate charts on the fly.  A JTable is passed in on construction and the chart is drawn onto a JPanel, from which an image of the chart can be generated.

It even won the prestigious (to me!) PSC ‘Code of the Month’ award and a few people had got in touch to say they were using it, which was nice.  When PSC lost all their data they resorted to using CDs they produced containing the most popular work to restore whatever they could.  Luckily Chartgen had made the cut!

I was quite chuffed to find that, possibly as much as 16 years after first being released, it is still available for download (note: the metrics appear to have reset in 2015).

PSC is still going strong and is a great place to fish for code snippets to help / inspire you.  I can remember many times it dug me out of a hole.  So thank you Ian Ippolito for a great site.